A felony or misdemeanor criminal arrest can

have lasting consequences in your life. Every

arrest is part of the public record. You must be

proactive in order to have your record removed,

even in cases where you were let go without

formal charges being filed and even in cases

where you were found not guilty of a crime. An

arrest will always be a part of your criminal record

and accessible by anyone including family, friends

and future employers. You must act now to protect

your future and remove your criminal record so that

you can move on with your life.

There are two options to remove your criminal record: Expungement and Sealing Your Record.

Certain misdemeanor and class 4 felonies can be sealed. Sealing your criminal record prevents it from being released to non-law enforcement personnel.

Q: Is my record expunged automatically?

A: There is no automatic expungement. Even if your case is dismissed, your arrest record will always be there unless you petition to have it removed.

Q: Can non- violent felonies can be sealed or expunged?

A:  Most felonies cannot be expunged, except for certain drug convictions and prostitution.

Q: The charges were dismissed, I don’t have to do anything else to clear my record?

A: You must be proactive and petition to have the arrest removed because it is not automatic.

Q: I was told if I complete my supervision, I would not have a record. Is that true?

A: Successful completion of your supervision ensures that you don’t have a conviction on your record. However, you still have a record because of the arrest, court appearances, and formal charges.

Q: Can most felony arrests and convictions cannot be either expunged or sealed?

Q: What is Executive Clemency?

A:  Executive Clemency is the process of having your criminal record, court records, and convictions through the governor’s office.

Q: What are my chances of having my record sealed?

A: It is easier to have your criminal record sealed than expunged.

Q: What are my changes of having my record expunged?

A: If you cannot have your record expunged at the county level, then we try executive clemency through the governor's office. If you do not try, your chances are zero.

Q: Is it expensive to have my record expunged or sealed?

A: In most cases, we charge a reasonable flat fee. This includes drafting the necessary petitions, exhibits, and preparing you for, and attending any court hearings with you, to maximize your chances of succeeding.

If you need an expungement, sealing of your record, and/or executive clemency, we serve the states of Illinois and Wisconsin. Give us a call at 847-899-8734 for a free consultation. Calls are answered 24 hours a day. If you prefer, send us an email at lawyerllll@aol.com. We offer affordable rates and possible flat fees for expungements. 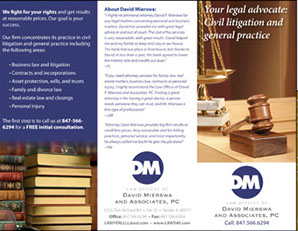